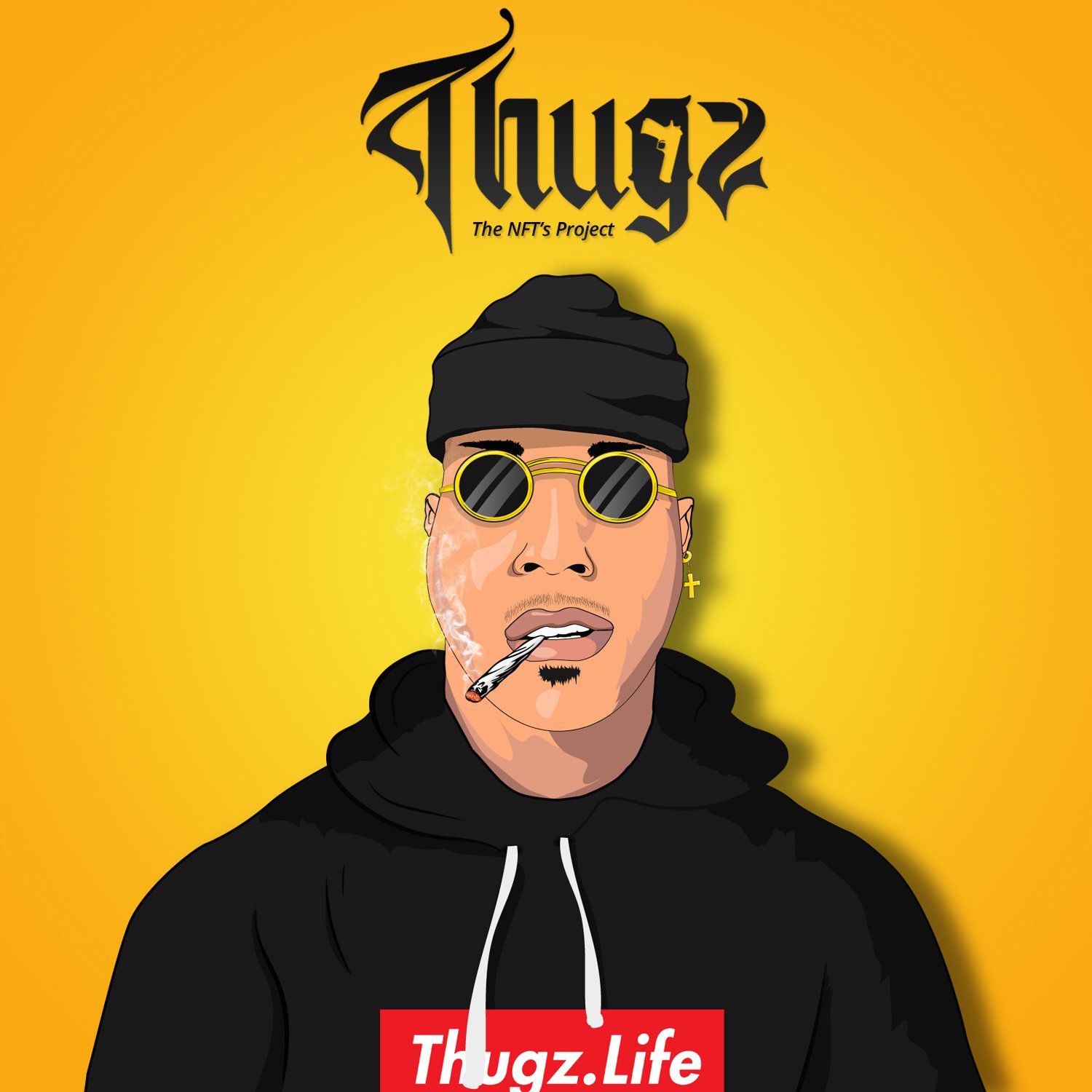 911 generative NFT avatars on Solana (include 11 Mythics) to access on play To Earn (“Thugz Unchained”) and win to earn (“War Thugz”).

Origin of Thugz NFT
When creating these NFTs, the artist was inspired by the T.H.U.G. L.I.F.E. popularized by 2Pac and having the
acronym The Hate U (You) Gave Little Infants F * cks Everybody.
For this collection, 911 Thugz will be available, (including 11 Mythics which feature celebrities from the world of
rap and cinema) made up of 111 attributes (caps, clothes, satchel, glasses, cigarette, chain, grillz etc…).
By creating this NFT designed by the artist as well as by the mint, you will have the possibility of becoming the
owner of a unique Thugz.
Mint is the action of buying an NFT randomly from a collection (example: Imagine a candy dispenser in which
you would insert a coin)
It allows you to acquire a Thugz before it goes on the market. Through this mint, a Thugz is randomly generated
with the different attributes. (Lexicon & How To Mint available on our Discord).
The mint will then be done on a combination of more than three billion possibilities.

Why Buy An NFT ?
What are NFTs? Non Fungible Tokens are certificates of authenticity attributed to a digital work.
As on the internet (and not just elsewhere), everything is copiable, NFTs allow you to appropriate a work and to
be the sole and unique owner. The authenticity of these certificates is made possible thanks to blockchains
(blockchain) a storage technology allowing to encrypt and identify data stores, inviolable and non-duplicable.
Recently some very big announcements have been made regarding the metaverse. The future seems to be
moving more and more towards this whole new field. As a result, with the metaverse, NFTs will become essential
because they allow the identification of a unique object that is unique to oneself.
After Reddit, Twitter in turn launches into NFT profile photos. It goes without saying that this process is set to
become more democratic in the years to come. The advantage of a profile photo NFT, unlike a simple image, is
that it allows its owner to be authenticated through it. Thanks to NFTs, you can certify that this image belongs to
you.
For the mint (project deployment), we chose the F Solana blockchain because unlike one of its competitors like
Ethereum, gas fees are extremely low. Indeed, during the mint your costs will represent less than 1% of the price
of your Thugz.
Once your NFT has been minted, you will then be in possession of your Thugz directly in your wallet (digital
wallet). Depending on the Thugz you get, it will be assigned a rarity score. It is in part thanks to this rarity score
that you will be able to resell or trade your Thugz with more or less values. It will be possible to sell and trade on
platforms such as Solanart, DigitalEyes or Solsea.
The NFT’s Project

Advantages of Thugz NFT
Above all, the purpose of this NFT is to be able to represent you through a Thugz with which you can identify. It
will not only represent your identity on social networks (as a profile picture on Twitter or Discord for example),acquiring a
Thugz will also allow you to participate in many events. The first event is surely the most symbolic in the values
that this project wants to convey. A charitable donation will be made at the end of the mint, 2% of Thugz sales
will be donated to an association.
Our team is working in parallel to develop a O game on Discord. Your Thugz will be the ticket to this game.
By participating in this activity (War Thugz), you will have the opportunity to make it even more useful with the
rewards in play.
Several mini-games, raffles and giveaways will be organized with the community according to the number of
Thugz sold (PS5 / Xbox / TV 4k / Iphone etc…). Many benefits will be added to the project thanks to our Private
Club partners with brands of CBD products, streetwear, urban accessories and brands that stick to the Thugz
Life mentality.
The NFT Thugz is therefore:
Adhere to a project and human values
A unique profile picture
An entry ticket for a game with many rewards
A crypto investment
Already have a foot in the metaverse
Different partners and private clubs

About the team
An accessible team who will give their all and listen attentively to the community’s feedback.
You can find each member’s social media profiles as well.
You can be sure that we will stay engaged because a lot is planned for the future.
The team behind this project consists of 8 members, aged between 20 and 38, passionate about the world of
blockchain technologies, NFTs as well as a future metaverse.
In addition to the actions put in place to promote the project by the team, it is also up to you to participate I
actively (whether through the various games or giveaways) and thus to grow the community. The larger and
more active the latter, the more value it will give to all Thugz in the NFT resale market.