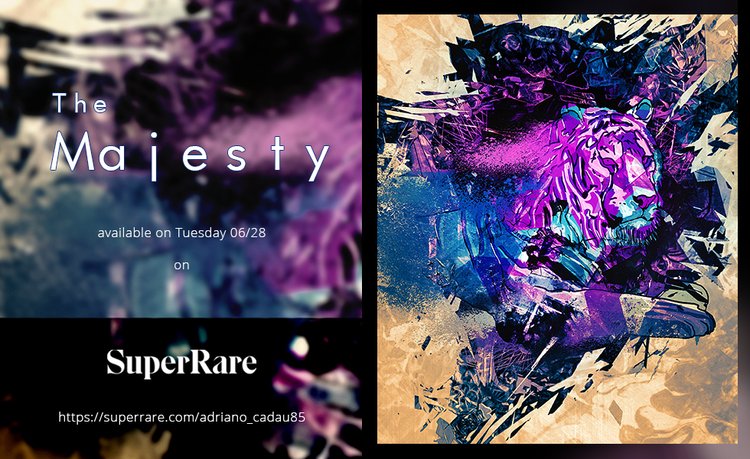 The Majesty is the abstract representation of the magnificence, power and control exercised over creation by one of the most wonderful and sumptuous animals on the planet; the Tiger.
With its haughty and composed posture, its mantle enchants those who see it, its grandeur draws respect and its roar inspires terror to those who hear it.

Elegance and strength exhibited through a single body

For this work I chose the tiger as a model because I believe it is one of the most fascinating and intriguing predators on earth and one of the few, after the lion, that is able to perfectly convey the combination of elegance and brutality. An elegance that I decided to represent using its bust drawn in the center of the stage, just as if I wanted to symbolize the beauty of its posture in order to emphasize the majesty of its graces, as if it were a beautiful model posing, captures the attention of the observer. The dynamics of the colors, the defragmentation effect symbolize the abstraction of its brute strength, its power of domination and its thirst for blood. The decomposition of the forms and the irregularity of the same, express all its brutality, all its ferocity and destructive force that are activated when its instincts feel the call of nature for their awakening.

An alternative way to interact with a killer

Elegance, composure, pose, model, almost make us forget that we are dealing with a predator and therefore a dangerous animal. The use of strong and bright colors play in favor of this purpose, making this ferocious animal look like a harmless and tame kitten, incapable of harming any soul.

My goal was to exalt the puppy side of the tiger by transcending the primordial and dark side that would flaunt the emergence of the image of elegance in the observer’s mind, preventing the work from making such an effect. In this way, the animal acquires dignity and respect by temporarily yielding a part of its aggressive instincts in favor of a superficial benign ridiculousness that is given to it thanks to the shades of color that recall those of a children’s puppet, almost a toy.