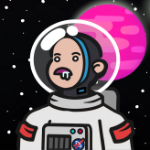 The Space Dudes were a massive collection of astronauts and space travelers from all countries of Earth. They were going to form the first space mission to take man-kind outside of the milky way. This had been a huge project, and had taken Earth’s most brilliant minds decades to plan and execute how to build such an impressive space craft. The ship had been built in the massive ship yards orbiting Earth and had cost 2 Trillion dollars total to complete. However, the finished product was worth it, the scientists agreed. The ship was massive, and capable of ferrying thousands across the stars, and even capable of creating its own wormhole, which it could use to travel between universes. This ship would be able to carry humans farther than anything ever created before in the past.