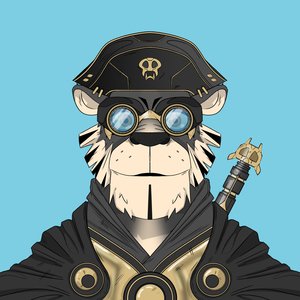 The Galactic Tigers is a Collection of 6969 Generative Tigers designed by a French Character Designer.

Each Artwork is Original, inspired by Pop Culture Space Operas, and mixed with NFT Private Culture that only the real NFT Lovers will understand.

We are in the year 69 AC (After Crypto). After a huge mistake made by the leaders of the Galactic Monkey Federation, the planet Apes was destroyed and their last survivors scattered across the galaxy. This event caused a sentiment of fear on all planets but one.

The planet Tigers is home to the one and only Galactic Tigers. A ruthless clan of Tiger Warriors, born to fight, trained to kill, but most importantly, keep balance and peace in the Galaxy.

The Tiger King orders his officers, the Tiger Leaders, to form a squadron of 10 worthy Tigers lead by the Chosen one in order to go on an important mission: Find the Emperor of Banana Fleets who caused the destruction of planet Apes, and bring him the justice.